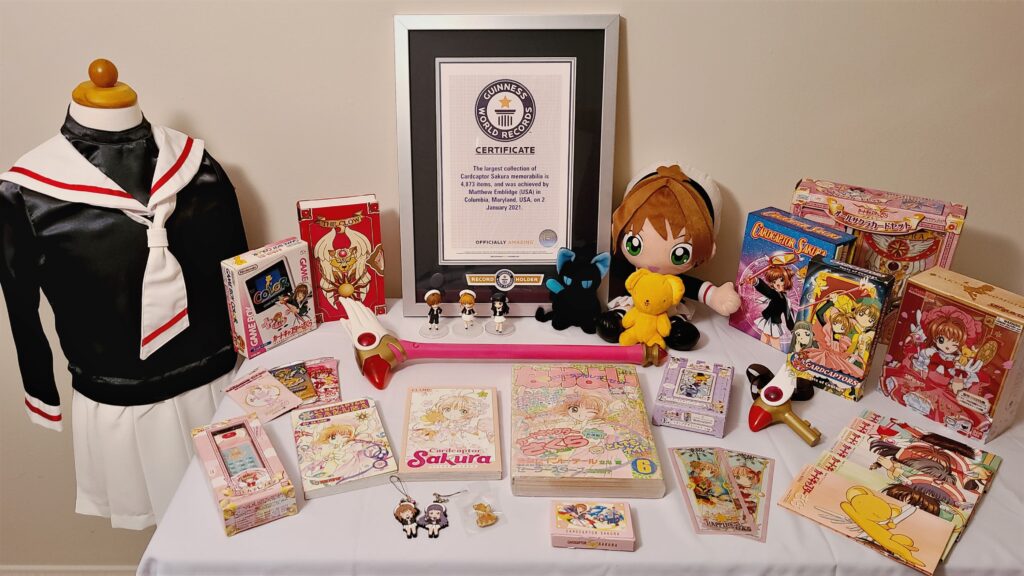 For those who are out of the loop, the Cardcaptor Sakura franchise is, very much, still hype until this day. In fact, a lot of fans have gone back into this popular mahou shoujo series due to CLAMP’s 30th anniversary.

Recently, a fan named Matthew Emblidge from the United States has broken a new Guinness World Record for the Largest Collection of Cardcaptor Sakura Memorabilia. Guinness has recorded 4,873 items from Emblidge, going past the previous record of Sofía Pichihua, consisting of 1,086 items.

Aside from collecting, Matt also reviews the latest chapters of Cardcaptor Sakura Clear Card over on his YouTube channel. He also shares things related to his collection over on his page, The Cardcaptor Museum.

The Cardcaptor Sakura Clear Card manga is still ongoing with the next chapter expected to be released in the first week of February 2021. The anime adaptation of the anime aired from January 7 to June 8, 2018. An OVA prequel premiered on September 13, 2017.

The first Cardcaptor Sakura manga was released in Nakayoshi from May 1996 to June 2000 and was compiled into 12 volumes by Kodansha. The anime adaptation originally aired in Japan from April 2018 to March 2000, with two animated movies.

Zenbu is part of the The Lily Cat. Support The Lily Cat in providing news, reviews, and features by leaving a cup of coffee or be part of the Kitty Squad.  You can reach to the Editor on Twitter.